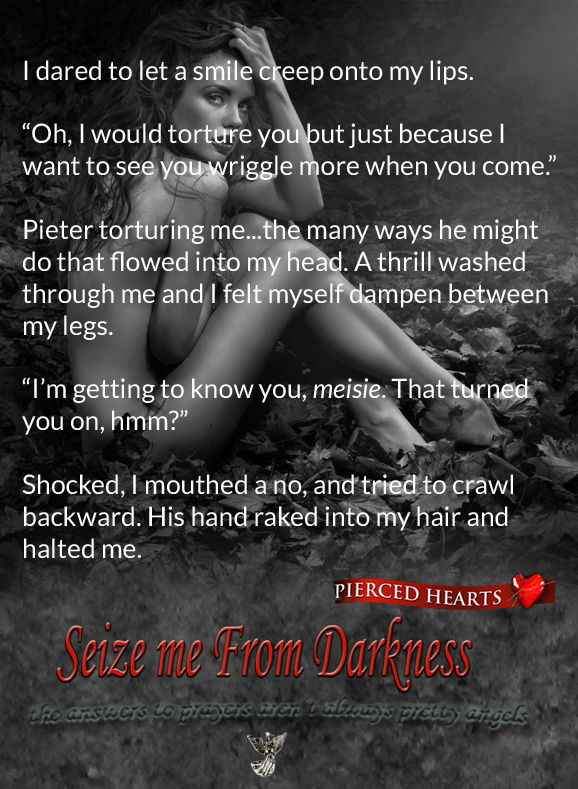 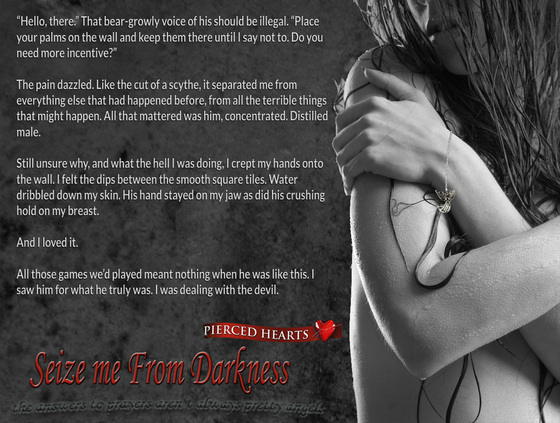 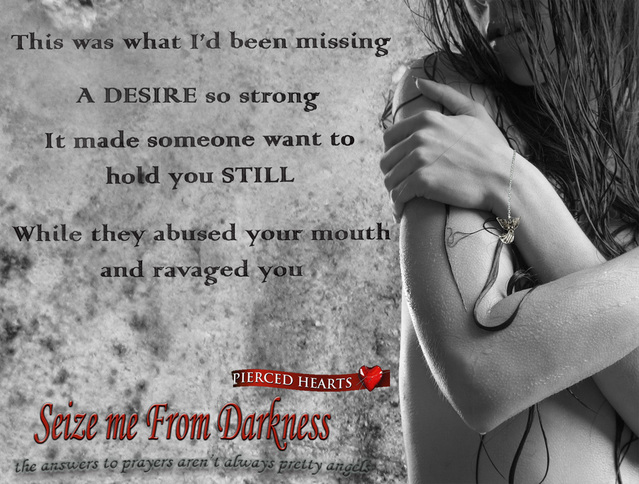 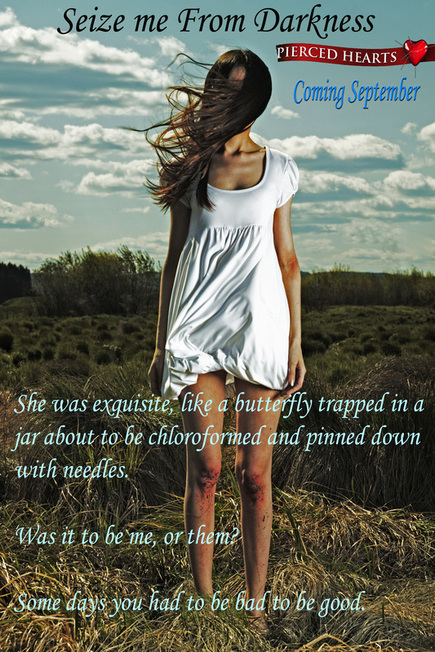 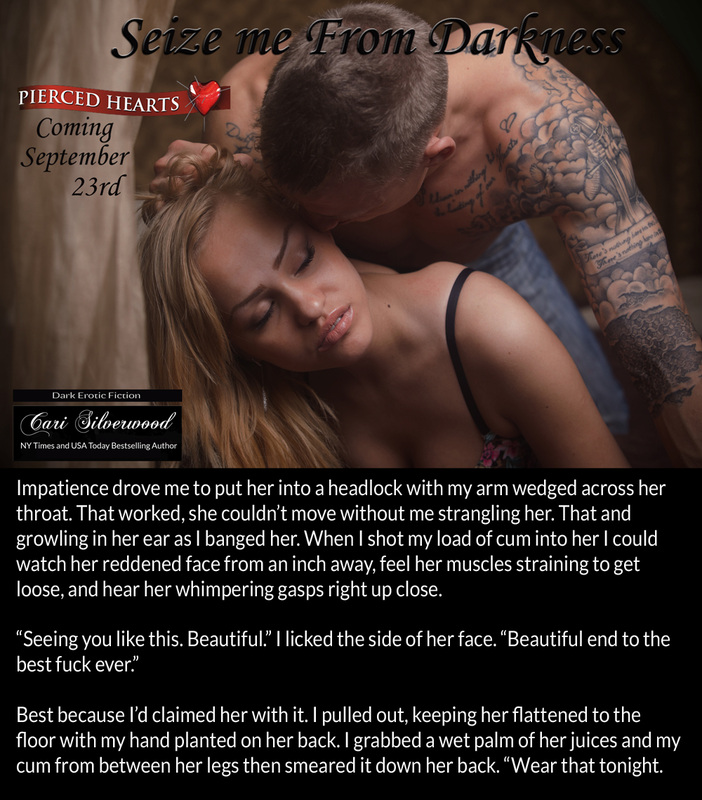 “I agree. This isn’t working.”

Pure agreeable statement, but she rocked back slightly before she nodded.

“Nice is bad, Jodie? You want mind fuck. You want mean. You want things you dream about. You have no idea.

Starting now. The rules are gone. I make my own rules.”

I took down the list from the door and held it, slowly tapping the laminated paper against my leg. “No. They were not.”

After unfolding the flaps of the cardboard box, I tucked the list down inside and pulled out the two gags. “Rule one. You don’t talk unless I say you can.” As her mouth opened, with the buckles trapped in my fingers, I dropped both gags into view, and dangled them. “Talk and I use these.”

Like magic, her mouth clicked shut. Now I had her attention. That had worked. I was perhaps as stunned as she looked. She touched her tongue tip to her upper lip as I stood before her and she kept her gaze swinging from the gags to my face. I had a feeling I’d never had a woman so rapt in what I said. Addictive. The pulse of excitement had centered at my groin. Nothing I could do about it. I already knew that looking at women in bondage revved my engine. But I’d never done more than look at pictures.

I ran through my epiphany, convincing myself as much as her. Bluntness was called for.

“My conclusions. You asked me to do this because you still want me in your bed. You want me to fuck you.” Her gasp, I answered by swinging the ball gag. She uttered no words. “Somewhere in your plans, you hoped. The rules, I made up those in line with what I knew you’d be thinking. You knew I’d not step beyond, or not much.

“This,” I swept my arm across, “This room was your idea. Your rules. Lock me up. Make me yours for a while, but not too rough or dangerous because that isn’t in my rules.” I cocked an eyebrow. “Yes?”

Though she frowned and shook her head I went on. It didn’t matter if she deluded herself.

“You imagined some safe little love affair, with some kink on the side? Doesn’t work that way. Either you hand over control, or I walk. No documentary. Nod if you agree.”

I waited. I could almost hear the clocks ticking.

When she nodded slowly, my heart kicked back in. If it had beaten at all for those last few seconds, I was unaware.

“Good. This room is no longer your prison. The house is secure and private enough. You’re coming upstairs as long as you behave.”

No protests. Good. For a woman who liked having an opinion on everything this was exceptional. I could have walked on a cloud, I was so hyper-aware of everything she did. Were her lips fuller, her cheeks flushed, her breathing faster? I thought so. But she didn’t know what I intended.

“Let me point out what could have happened if this stupid plan had gone wrong. If you picked a less restrained, a less sensible man. You’ve given me a hundred filthy dirty ideas about what I could do to you. I never knew what depths my mind could plunge to. Now I do. If anyone was mindfucked so far, it was me. Another man would follow through. You think these gags are bad? This one with the red ball is simple, it just stops you talking.” I laid the other, metal and leather gag across my palm. “This one is a spider gag. With this in, you can’t close your mouth and your mouth can be fucked. Do you have any idea of the things on the internet? Wait.” I held up my hand. “I guess you do, from what’s in those books you read.”

I bent and rested my hands on my knees. Mind fuck. This I could accomplish.

“You want a list? How about the list of things a man could do to you in this situation… I could make you wash my dishes naked with a gag in. I could tie you up, cut your clothes off and just stare at you all day – just because I could. I could make you be a piece of furniture and ignore you. Humiliating? Yes. I could train you to be an anal slut. I could fuck your ass all day long. I could collar you and make you crawl around on the floor like a dog at a convenient height for blow jobs. I could share you with the man down the street, stick needles in your nipples and use them and some string to fasten you to eyebolts in the ceiling. Want to try that one? And at the end of it all, if I was the worst sort of man, I could kill you and bury you out there on the beach.” I swung my arm up to point. “Maybe no one would ever find you.”

Now she was truly speechless, maybe even scared. Served her right. I watched the little swallows she did for a count of five.

“But I’m not going to. I’m your friend. Remember that, no matter what I do.” I smiled one-sided but I’m sure it didn’t reach my eyes. The eyes are the mirror to the soul and right then my soul was very dark.

Then I squatted down in front of her, a couple of feet away, reached out and ran the very tip of my forefinger along her plump bottom lip. “My rules. Open.”

A second’s hesitation at most. She shivered and her mouth parted. Mind fuck, here we come.

“Good. Jodie.” Then I very deliberately held up the spider gag, slipped it between her teeth, pulled her head forward, and held her there while I buckled it. Hair made a great anchor point. I slid my splayed fingers into the roots and tilted her head back then I added a rule. “Second rule. You do my dishes whenever I say. You wear the spider gag. You don’t speak unless I say. But first…” Eyes locked on hers, I advanced one finger into her mouth and stroked her tongue. And she let me.

Had I hypnotized her? She did nothing but stare back. What I wouldn’t have given to fuck her mouth right then and there.