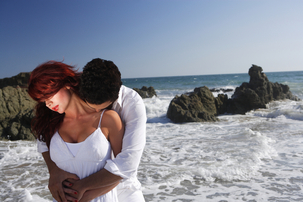 I’m a newbie erotica author so I’m being a tad presumptuous here, but I’ve had a lot of people tell me I write ‘hot’ sex scenes. So here goes. Bite me if I’m wrong. That last is said tongue-in-cheek. No biting. Please.

I’ve cobbled my own method and style together from what others have told me, and from what I’ve read, but not all of it was from reading about sex scenes. I’m going to add my own slant on things here, because if I don’t I may as well just send you off to another’s link. You may disagree with what I say, but then everyone does it a little different. Sort of. So much sex, so many permutations.

1/ Sex doesn’t start in the bedroom. If you want it to zing, your people have got to want to be there, doing it. I’ve seen authors bemoan having to write sex into their stories. I’ve seen erotica authors say how sick they are, how bored they are, with writing sex. Sex scenes shouldn’t be gratuitous, they need to be there for a reason -- plot or character development preferably. This IS erotica though, and character development is a pretty fluid thing.

Bottom line -- if you want it to be hot enough to leave scorch marks on the sheets…or walls, you, the author need to feel as if it should be there. For whatever reason. State of mind is EVERYTHING.

2/ Sex is not some fill in the dots picture, it’s an active event. Body grinding against body. Sweat trickling between breasts. Cardiac arrest level heart-pumping action.

To me that is the key: Action. Things are moving, people are feeling, thinking (in the earlier stages anyway :)  )

I've always loved writing action and I tend to SEE what happens in great detail with action and almost go slow motion. That's what you need with sex scenes. If you think you do action well, you are on the right path -- apply that skill to sex. Great detail helps. Every so often try going really really detailed. Pick something that's a tiny thing most authors might not put in often, if you can, or SEE a movement, a way the two people interact that's different in some way.

The stubble on his face scraping her butt cheeks. The dribble of sweat at the corner of her eye being licked away. The dragon tattoo, at the small of her back, being outlined by his tongue.

So, are you seeing in great detail? Good. You also need to remember to BE there. No, you are not just a voyeur sitting in a chair watching. You are one of those people. Switch between them if it takes your fancy -- though be careful how, as doing it more than once is fraught with difficulty. The reader needs to identify and empathize with the person having sex. If you’re not there, how can they be?

You are in their Point of View (POV), possibly even more than in most parts of a story. Feeling embarrassed yet? It can be. When I saw that I had gotten a contract for Three Days of Dominance and that I could go on to write more erotica I got quite embarrassed. People would READ (OMG) these scenes I'd written, and they are so intimate. But you have to let yourself go, and really think about what you feel during sex, about what your body does.

Most of us are only one gender, I certainly am…so describing a man's orgasm from inside his head, to me, is odd. But you can do it. Ask people. Read other’s descriptions.

Okay, so sex is action. What sort of action though? Simple? Maybe.

Write action in the sequence it happens. Got that?

Oh, and substitute him/ his below, if you want to.

Remember internal thoughts are part of the action. Now here is where I learnt from what Cherise Sinclair has said, and she says she got this from Morgan Hawke…LOL. I’m paraphrasing here, in my own words. I already could write sex, but reading this description made me realize why some actions happen in the order they do, and helped a lot. We are living creatures, we have nerves. Strictly according to how our bodies function, this is the order things happen:

a. His Action -- he kisses her breast.

b. Her Reflex action (ie reaction) Think of this like the instinctive knee jerk from tapping the knee.

Maybe she gasps or makes some other involuntary movement -- her eyes widen, she shudders, whatever. These are all uncontrolled reactions, or close to it.

c. The mind gets involved next. Again involuntary or almost but in internal dialog. Like an OMG in the head. The Yes! in thought. Lord. Jesus. Fuck. Hell, yeah! Those sorts of short, exclamatory terms. At the same time you can put in sensations -- what you smell, feel, taste, see and hear.

d. Mind again. Only here we have her thoughts that she’s actually processed and to a degree, been logical about. Should I be doing this? Lick me there again, James! Why didn’t I paint the ceiling beige?Whoops, bored character alert. Do something else, James!

e. Her thought-out reactions. ie Things she does deliberately.

f. Back to him and he does, says something, and we’re off on the next round.

Just remember to stay in the POV of the person you are inside (not that sort of inside -- inside their head.) You do not, cannot, hear the thoughts of the other person (s), unless you have a character with a telepathic ability.

I tend to use all sorts of anatomical terms in my descriptions, you don’t have to, but it is a little more likely to get repetitive if you only have one term for the pussy, vagina, cleft, cunt, slit etc.

Now. Important. You do not have to, and should not, put in every single one of the above actions and thoughts every time. Mix it up. Just keep to the right timing sequence.

3. Next: Ingredients should vary.

If you think the sex you’re about to write is boring, maybe you should (a) be using different ingredients, and (b)be writing about something that does turn you on.

Sex is not generally, precisely choreographed. Though you should have some idea as to what they’re going to get up to before you write it, the people and where they are, what they have on hand, who is around them -- all these introduce variables. Start writing and go with the flow, to a degree. See where they take you. You may be pleasantly surprised.Even better, see where YOU take you. Remember, that’s you in the scene, albeit with some character add-ons that might not be you. Those character quirks should always be there too, in the back of your mind.

4/ I repeat what I said above. Write what turns you on. It helps a lot. Don’t try to write something that makes you go ick or leaves you yawning. If you do start yawning, something is wrong. Rethink, rewrite.

If your own writing isn’t getting you all hot and bothered, something needs changing. Only panties need changing if you’ve written a hot scorching sex scene.

5/ Second last of all, your general writing skill will affect how these scenes turn out. Watch the rhythm of your words and sentences. Don’t just use short sentences. A bit of poetry in motion never hurt as long as it’s not ‘purple’. Experiment with words a little. Just because everyone else says the head of a man’s cock is purple and mushroom shaped, doesn’t mean you have to also. Don’t start every sentence with ‘he’ or ‘she’. With sex scenes this is a really easy trap to fall into. I know I do it still.

6/ Last of all. Get someone else to read what you’ve written. You’d be surprised what someone else can pick up that you’ve missed. This, of course, applies to all writing.

EXCERPT from Three days of Dominance

Just to set the scene, Danii is sitting, legs spread, atop Heketoro’s lap.

She felt his cock push in and tease her lower lips. Heat flared, curling around, making her wriggle. Oh, if he’d move a little that way, the head of his cock would be in just the right spot.

“Unh!” There. Yes. “Wait,” she choked out the word, her voice thick with the lust jumbling her thoughts. She’d remembered an essential.

She leaned sideways to crab her hand across the floor, found the condom wrapper where she’d dropped it, then ripped it open. Though he frowned, looking as if he thought she’d done something odd, he allowed her to roll the sheath down over his cock. As the last quarter inch unrolled, he bent and swirled his tongue across her nipple.

While still sucking, drawing her nipple up tightly between teeth and tongue as if it were a prize he’d captured, he lowered her onto her back.

“Ahh.” She bowed her spine, pressing her breasts up at him. Changing sides with his mouth, he flicked at her other nipple with the tip of his tongue. When she put her hands up to wrench him closer, he swiftly collected her wrists in one hand and pinned them above her head.

For a few seconds, she struggled to free them, but it was as if manacles of stone had descended on her. Nothing moved at all -- his weight and strength were too great. Surrendering sent first a tendril and then a cascading wave of liquid heat sizzling through her. He paused and waited with sinister patience until she stilled.

The rapid rise and fall of her breasts as she breathed hard through her open mouth betrayed her arousal.

He smiled and lowered his mouth to continue his assault on her breasts with tongue and lips and nipping teeth. Pleasure and pain, predator and prey, and she knew so acutely which was which. She watched enthralled as he worked on her.

This was nice. Too nice. She groaned, arching again. Giving in, this once, couldn’t hurt. She smothered her misgivings.

Now, if I've broken some of my rules, please don't tell me. Authors can be grumpy bastards and throw things.

Copyright Cari Silverwood 2011. All rights reserved. No part of these publications may be reproduced, stored in a retrieval system, or transmitted by any form or by any means, electronic, mechanical, recording, or otherwise, without prior written permission of the author.